Right on the Tick 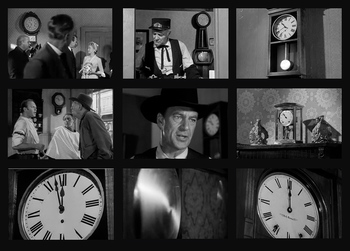 Do you think something is going to happen at noon?
"Right on the tick! Amazing! Absolutely amazing!"
— Doc Brown, Back to the Future Part II

This trope is all about the association of important plot events with a specific time. This includes times which are linked to folklore, urban legend, or history, but this trope also applies to in-universe examples, if the time in question is given significance in-universe. Extraordinary events—both good and bad—may happen at a specific time, or that time may serve to remind characters (and the audience) of a significant event which has already happened.

Not all examples of attention paid to the time of day belong here. It's only Right On The Tick if a) it has already been established in a work that this time is significant; and b) special attention is paid to the passage of time or the proximity of Time X. Such attention can include shots of or descriptions of watches or clock faces, but the significant time can also be indicated by tolling church bells or the chiming of a distant clock. For example, if you're watching a movie in which aliens attack only at 7:07 A.M., and the characters in the film keep watching the clock to see when the aliens will attack, that's an example of Right On The Tick. If, on the other hand, the aliens' kill happens at a randomly chosen time, and the camera just happens to pan out and show us that Bob became breakfast at precisely 7:07 A.M., that may have dramatic significance, but it's not an example of this trope.

Subversions may include stories in which something which is supposed to happen at X o'clock either does not happen at all or happens at a different time.

Compare Race Against the Clock. Contrast Clock Discrepancy. See also When the Clock Strikes Twelve, a trope specifically about midnight. All examples related to midnight should be listed there rather than here. See also Exact Time to Failure, which is about relative time rather than absolute. For other references to clocks or time, see Stopped Clock or 24-Hour Trope Clock. For a character who's determined to keep everyone on time, see Clock King. See also Clockwork Prediction and Three... Two... One... Despite the name, has nothing to do with The Tick.