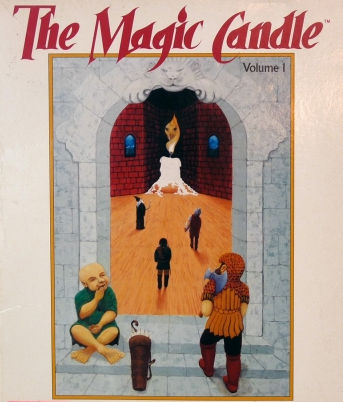 The Magic Candle is an RPG for Commodore 64, Apple ][, and PC/MS-DOS by Mindcraft, first published in 1989. There was also a Japanese version for the FM Towns.
Advertisement:

The demon Dreax is imprisoned by the Magic Candle, a prison constructed by heroes long ago. The candle burns eternally due to the spell of restoration cast by the 44 guardians each year. But the guardians have disappeared and the candle melts! If nothing is done, Dreax will be freed in 1,000 days' time. Lukas and his chosen party of heroes must scour the world for a way to restore the candle.

Two sequels and an assortment of spinoffs followed (most of them only available on the PC).