Video Game / The Magic of Scheherazade 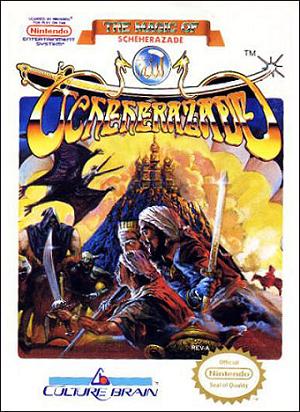 Kinda like that, except with flying monkeys and time-traveling cat girls.
Mustafa: Hey, I should have gotten 100 more rupias.
Kebabu: Mustafa! I said stop it!
Supica: Whoopee!
Epin: Hey! Don't fool around!
Gun Meca: That's right. This will be the decisive battle.
Pukin: I'm trembling with excitement, sir.
Rainy: I'm not afraid, I'm not afraid...
— The hero's companions, on their way to the final battle
Advertisement:

A 1989 NES game by Culture Brain, The Magic of Scheherazade is the North American release of the 1987 Famicon Action RPG game Arabian Dream Scheherazade. Drawing its themes from the Arabian Nights tales, it wasn't a major release at the time, but has grown into a popular cult classic, with innovative features that have since become standard console RPGs elements.

The story revolves around a nameless hero, the descendant of the legendary hero Isfa who sealed the world of demons away centuries ago, who wakes up with amnesia after a fierce battle, only to find a feline "time spirit" named Coronya who's been waiting for him. She explains that he tried to confront an Evil Sorcerer named Sabaron and lost, and so Sabaron cursed the hero with amnesia, threw him into another era, and has imprisoned the royal family, including the hero's girlfriend, Princess Scheherazade. The hero, with the help of Coronya and a variety of other party members he meets along the way, must navigate a network of time portals, defeat the five elemental demons Saberon has awakened throughout the land, and find his way back to the present for a rematch with the evil wizard.

In the meantime, though, there are rupia trees to plant and harvest, casino games to play, mercenaries to hire, bank loans to take out, classes to attend, magic carpets to fly and a large variety of side-quests revolving around one of the most cheerfully eccentric casts to ever grace an 8-bit RPG.