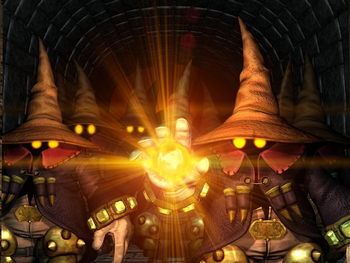 "Witches live among us in secret. Their magic passed down from an ancient race, diluted, half-forgotten, but dangerously powerful."
—Dolan Thirty-Seven, The Last Witch Hunter
Advertisement:

A fantasy race or species for whom magic, or the ability to use it, is inherent in a setting where not everyone can do it.

This usually means that the ability is present in every member of the species. How well the members can tap into this ability can vary; in some cases, every member naturally seems to be adept at it, other times the ability to use magic needs to be honed. The variation might stem from conflicting historical views on witchcraft — some groups saw them as women who had made deals with the devil, others as the opposite, so the trope of magic being inherent developed instead.

If they are an offshoot of an existing, nonmagical race, being descended from ordinary folk who somehow managed to become empowered is a common origin. In stories focusing on humans, magically-inclined characters might be explained as being part of a Human Subspecies. However, it's also common to have an entirely different fantasy race whose hat is focusing on the mystical.

This attribute could be used to explain the setting's magic users (like Witches and Wizards). Compare Token Wizard (one might think of the Mage Species as the Token Wizard Race for the overarching setting). See also the "Mages are like a Race" type of Our Mages Are Different. Compare Superpowerful Genetics.