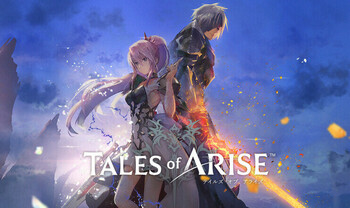 Challenge the fate that binds you.
"If it's a choice between this or going back to being a slave... then I choose to fight."
— Alphen
Advertisement:

Tales of Arise is the seventeenth mainline entry in the Tales Series, released worldwide on September 10, 2021 (and a day earlier on the 9th for Japan) for PlayStation 4 and 5, Xbox One and Series X, and Steam. It was originally announced at E3 2019 as the first installment to be primarily developed on the eighth generation of consoles, as the previous game was also developed for the PlayStation 3, but since then it has become a cross-generation game with versions for the ninth generation consoles.

The inhabitants of the planet Dahna have always revered Rena, the planet in the sky, as a land of the righteous and divine. At least until the advanced Renans came down and conquered Dahna with sheer force. For three hundred years Rena has ruled over Dahna, pillaging the world beneath of its resources and its people of their dignity and freedom.

The game focuses on Alphen, a Dahnan man who has no memories and has lost the ability to feel pain, and Shionne, a Renan noblewoman whose Curse of Thorns brings pain to whoever touches her. Along the way they are joined by: Rinwell, a Dahnan mage able to use spells despite it supposedly being something only Renans could do; Law, a Dahnan who is a member of the "Snake Eyes" police organization; Dohalim il Qaras, a Renan Lord who espouses equality; and Kisara, Dohalim's Dahnan bodyguard with a motherly streak.

Tales of Arise contains examples of: