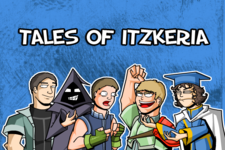 Tales of Itzkeria is a freeware humorous RPG created on the RPG Maker.

Itzka is a hardcore gamer (how anyone can play videogames in a fantasy kingdom is anyone's guess, but oh well) who embodies the "loner" stereotype to the letter - he literally hasn't left his house in years. One day, his friend decides it's finally time to go outside. Unwillingly, Itzka's exposed to a beautiful fantasy land filled with adventures. After a terrible incident however, Itzka's forced to abandon his home forever and travel the world in search of the mightiest power imaginable - the Master Sword (yes, THE Master Sword). Because, you know, he's the Chosen One. On his journey, he meets and befriends other people such as:

Datzo, a former Imperial Knight, and the one who initially takes Itzka out of his house. A street-smart kid that loves women, alcohol and cash more than anything. Wherever he goes and whatever he does, he does it for his own personal gain first. However, he does care about the people around him as well, as he seems to be legitimately interested in helping Itzka out, and he's also the only one who's actually interested in saving another human being during the attack on Varna.

Kosyo, a Black Mage, and overall the Straight Man of the group. He's the most knowledgeable one of the group by far. When he does research, he does it flawlessly, being able to pinpoint the exact locations of ancient artifacts in a matter of months. Despite never doing anything remotely evil throughout the entire game, he has this evil aura around him at all times. Probably because he's an artist.

Milen, a paladin who, like all self-respecting paladins, has an affinity for the green stuff. He also has a severe case of squirrelophobia. But despite all that, he's actually a really cool guy and really supports the party before an attack by Darius' general leaves him unable to fight

Mitko, a mercenary, and the only character who can use two weapons at once. A big guy who doesn't speak much unless required for plot exposition. Hired by the Commandante to help the group out after Milen is badly hurt. In reality, he's Darius' right-hand man sent to observe the group and eventually dispose of the group once they fulfill their purpose.

Laura, Itzka's female clone created in order to replace him as the Chosen One and acquire the Master Sword for Darius. When she fails, Darius orders her execution. She's playable during the final part of the game. Trained since birth to be an assassin... for some reason, she's not very aware of many things, even her own human emotions and personality.

The game itself is a hilarious deconstruction of the entire JRPG genre, poking fun of dozens of tropes and rules normally applied to console RPGs. Playthroughs vary in length, but first one's usually about 5-6 hours, though you're required to play through it again with Itzka's stats and skills intact in order to get the real ending. It can be found here