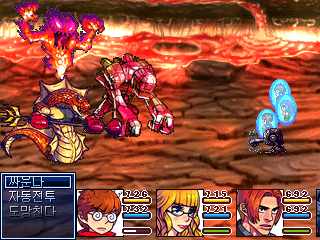 Surprisia is a freeware Role-Playing Game made with RPG Maker. The game consists of 3 chapters; chapter 1 was released in 2004, chapter 2 in 2006, and united version containing chapter 3 came out in July, 2008. Development started in January, 2003, so it indicates it took more than 5 years to complete the project.
Advertisement:

The game features a boy Ningu, who is named after the developer's name, as he prepares for his ceremony at his age 15. As an upcoming member of 'Thieves' Town', he is claimed to bring something valuable by himself. Accompanied by his friend, they embark in an adventure to gather some treasures nearby his place - and so it begins...

Surprisia can be downloaded here

and scrap some infos.