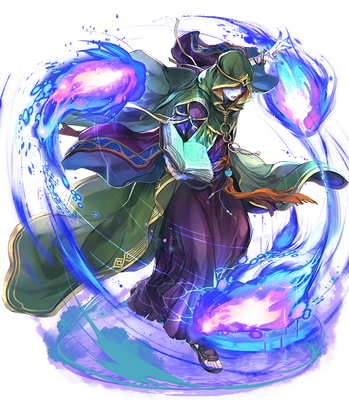 "I am the Black Mage! I casts the spells that makes the peoples fall down!"
— Black Mage, 8-Bit Theater (Episode 024: "She's a White Magic Woman.")
Advertisement:

These mages are all about attacking with spells and doing lots of damage with them. Typically these mages will be users of most if not all types of Elemental Powers (one element is not unheard of, though), with Fire, Ice, Lightning being particularly common, and may fall under Linear Warriors, Quadratic Wizards. They do not heal (or only have minor healing spells) and typically pack Area of Effect spells in their arsenal.

Very frequently Dark Is Not Evil.

The term comes from JRPGs, particularly the Final Fantasy series, and is in stark contrast with its meaning in European tradition which is "a user of evil magic".

Often overlaps with Squishy Wizard and Glass Cannon. Contrast The Medic and White Mage (the defensive or remedial equivalent).

Not to be confused with Black Magic (which is outright evil rather than merely destructive) or the character Black Mage Evilwizardington (though he is an example of both tropes).