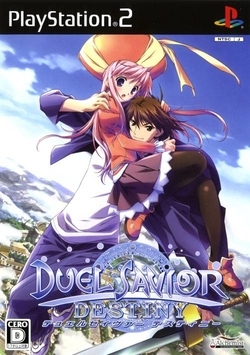 Touma Taiga is a man of passions. Passion for sex, so he’s in the middle of a plan to have a hundred girlfriends at once. While he’s meeting a temporary setback, he and his sister Mia stumble across a strange red book. When they touch it, they are suddenly dragged into an alternate world where Mia is extended the choice to become the Messiah and enter the Floria academy. Feeling left out, Taiga demands to also be able to take the entrance exam despite male Saviors supposedly being impossible. To everyone’s surprise, he passes when he calls forth the Aether Relic Traitor immediately after Mia calls her own Relic.

Taiga isn’t too concerned with what the job actually entails as he simply heard the promise that the Messiah can shape the world as they like after saving it from the destruction of Ruin and begins integrating into the new class, mostly by flirting with the girls in it. Before too long, however, things take a turn for the serious and Taiga finally shows his heroic side, making him one of the strongest contenders for the title of Messiah. But is it really that simple? After all, Ruin is beginning to make its move to destroy the world.

Duel Savior is a fighting game with considerable story elements putting it close to visual novel territory. There are six heroines, each of whom unlocks in later cycles of the game after being cleared. Finally, the story ends with a harem route, which was redone minus sex scenes to focus on the princess from the original version.

Has nothing to do with the three Gundams it shares names with.