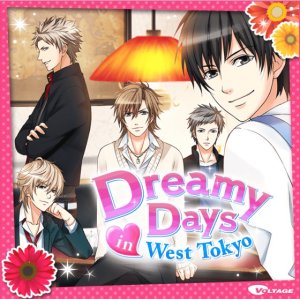 Do you remember our promise?
The time for us that was put on hold is beginning again.
Advertisement:

Dreamy Days in West Tokyo is a Romance Game Visual Novel from Voltage, Inc. for iOS and Android devices. It tells the story of a young woman, the player character, returning to her old neighborhood after moving away ten years ago when she was a young child.

Upon her return, she finds that many of her childhood friends still live in the neighborhood, and they still remember her. After ten years, however, they've grown up into young men. As she rekindles her old friendships, she begins to see unexpected sides to the guys she's known since forever, and old childhood crushes just might blossom into romance...