All spoilers for Mobile Suit Gundam SEED are unmarked. You Have Been Warned! 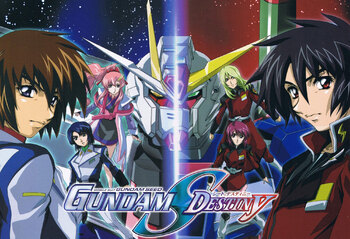 Destiny takes place two years after the end of SEED, and follows the story of Shinn Asuka, a young Coordinator and ZAFT pilot. A surprise attack on a ZAFT military base and the subsequent Gundamjacking of three of ZAFT's new Super Prototype Gundams kicks off a sequence of events that results in a second full-scale war between ZAFT and the Earth Alliance. However, things are not as clear-cut as they seem at first, and questions arise over which side of the conflict is really in the right. About halfway through the series, much of the cast from Gundam SEED returns to the spotlight, and the series gradually shifts to their POV, considerably changing the tone of the series. It has its own sidestory in Mobile Suit Gundam SEED CE.73: Stargazer.

Development Hell and is part of an ongoing CE "Ignited" project.