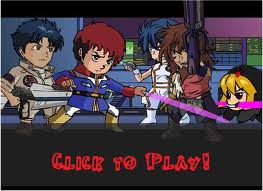 Get Ready For Gundam, unlike any you've seen before...Really tiny and cute...

Gundam Fighter is a Flash Fighting Game that mixes together Loads and Loads of Characters from the Gundam Franchise in a more or less chibi form, attacking with jokeful references to their characters from their shows, and their respective mobile suits used, which will as a part of their body. yeah... It's that kind of game. it is extremely fun and hilarious to play, easy to learn but tough to master, and each character has something different to offer.

The series appearing in this game include:

It can be found and played for free Here

Not to be confused with Mobile Fighter G Gundam, though very relatable.

This Game Provides Examples of the Following Tropes.