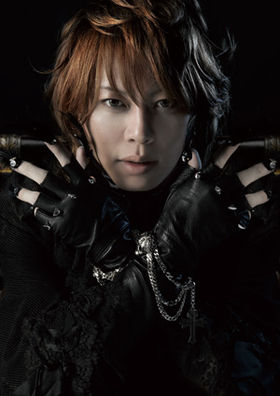 Pictured: The greatest case of Older Than They Look in recorded history. note  He was 40 years old when this photo was taken.
Advertisement:

Takanori Nishikawa, born September 19, 1970 in Hikone, Japan, is a Japanese singer, better known as T.M.Revolution. Despite most of his songs being written by Akio Inoue and composed/arranged by Daisuke Asakura, TMR is considered Nishikawa's solo project.

Nishikawa got his start in music as the vocalist of the Visual Kei band Luis-Mary from 1990 until they disbanded in 1993, during which time he operated under the Stage Name "Haine". Nishikawa first worked with Daisuke Asakura in 1995, providing the vocals for the A-side of Asakura's third solo single which was released under the alias of "Daisuke Asakura expd. Takanori Nishikawa" (expd. meaning expanded and designating Nishikawa as a guest vocalist). Asakura liked his voice so much that he decided he wanted to continue working with him. The act T.M.Revolution (Takanori Makes Revolution) debuted the next year with his first official single "dokusai -monopolize-".

In 1999, Nishakawa married Yumi Yoshimura of Puffy AmiYumi fame, though the pair divorced in 2002 after it emerged Yoshimura was having an affair. On August 2020, he got married to someone outside the entertainment industry.

In 2017, he began to perform music under his own name as a solo artist rather than as "T.M.Revolution".

Tropes associated with T.M.Revolution's music and videos, and Takanori Nishikawa himself include:

His costumes are the stuff of legend, and throughout his 16 years of activity have provided examples of the following tropes: