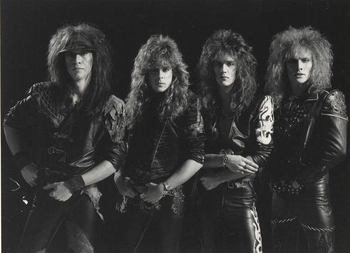 Originally a straight-up metal band. When American vocalist Tony Harnell replaced original vocalist and co-founder Dag Ingebrigtsen, international success was born. Known for their vocal harmonies and fast soloing courtesy of maestro guitarist Ronni Le Tekrø, TNT had eight albums released with Harnell before British vocalist Tony Mills replaced him. Fan Dumb ensued. Then in 2007, The New Territory was released, causing further Broken Base wars to ensue. Tony Mills left TNT in the summer of 2013 and a couple of months later Tony Harnell confirmed that he had rejoined the band. In January 2015 Harnell announced he had left TNT again, however he announced his return to the band in May 2016, only to leave yet again in October 2017. TNT officially revealed their new vocalist, Baol Bardot Bulsara, at Oslo Spektrum in November 2017, when they were the opening act for Scorpions. TNT released their thirteenth studio album, XIII, in June 2018.

Not to be confused with the album of the same name, which is by a different band, or with the American cable network TNT or Russian broadcasting network ТНТ.

TNT are an example of these tropes: