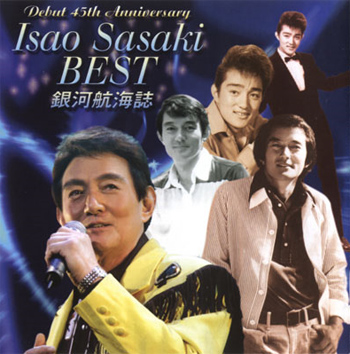 "Isao Sasaki" (originally Isao Yamada, born May 16, 1942) is a prolific Japanese singer, known for singing opening and closing themes of various anime and tokusatsu shows especially aired in the 70's and 80's, though he occasionally sang songs from shows in the current millennium. He did some voice-acting, particularly in Kagaku Ninja Tai Gatchaman and Uchuu Senkan Yamato.

Due to his deep, charismatic voice, comparable to Elvis Presley (in fact he began his career as an Elvis impersonator since Elvis has always been VERY well-loved in Japan), most of his songs are beloved. His works, particularly his older ones, are brimming with Hot-Blooded music that are quite memorable to this day. Japanese metal band ANIMETAL have remixed most of his songs.He also has made many songs in English, and a very good one at that.

You can look up his Other Wiki

Notable characters he has voiced: