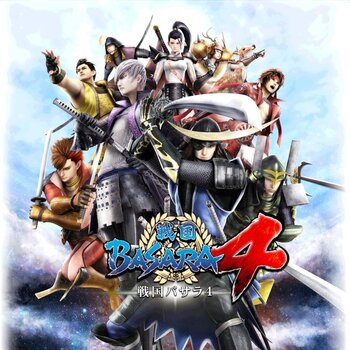 Sengoku Basara is more or less a copycat of Samurai Warriors, only created by Capcom. However, once you look past their similarities, it becomes clear that Capcom didn't want a historical simulation like the one Koei made. What they wanted was a stylish new-generation Hack and Slash with a loosely-based Sengoku setting, and increasingly ludicrous and over-the-top gameplay, characters, storylines, and general aesthetics.

The result was a franchise that abandoned such things as logic, physics, general subtlety, and historical accuracy, and instead ran entirely on Rule of Cool, a World of Badass chock-full of Flanderization, for better or worse. Despite a failed attempt by Capcom to bring the first game to the west by giving it a Cut-and-Paste Translation treatment in the form of Devil Kings, which changed the characters' names and removed all Sengoku Period references (leaving Capcom reluctant to localise the sequels), the series maintains a strong fanbase, especially in Japan, mainly because, if nothing else, it's just fun.

There are four main games so far, as well as several spin-off titles for various consoles:

An anime adaptation of the series by Production I.G started airing on April 1, 2009. A second season began July 11, 2010 followed by a feature film debuting in cinemas June 4, 2011. FUNimation picked up the series to be dubbed, as Sengoku Basara: Samurai Kings rather than Devil Kings, and with an equally-popular cast of who's-who in voice acting. A standalone anime, titled Judge End, aired from July 5th 2014, this time produced by TMS Entertainment.

In the wake of the anime's success, Capcom announced that Sengoku Basara would be brought to the US and Europe once more, starting with the third game, translated faithfully, and titled Sengoku Basara: Samurai Heroes. In August 2012 the first two games and expansion were collected in an Updated Re-release for the PS3.

Each game in the series has had one or more manga spin-offs to its name, drawn by various different artists in various different styles. In 2012, a two volume English translation of the second manga by Yak Haibara, named Sengoku Basara: Samurai Legends, was released. A High School A.U. called Basara Academy is also being published, and got an anime adaptation in 2018.

As if that wasn't enough, it's got its own series of stage productions, Butai Sengoku Basara, first performed in 2009 and still being produced. A Live-Action Adaptation of the anime titled Sengoku Basara Moonlight Party also aired in 2012.

Not to be confused with the Real-Time Strategy game Sengoku, the shoujo manga Basara, or trash.note The Spanish word "Basura" is spelled and sounds similar.

This page contains spoilers for both the games and the anime.

The anime includes examples of: