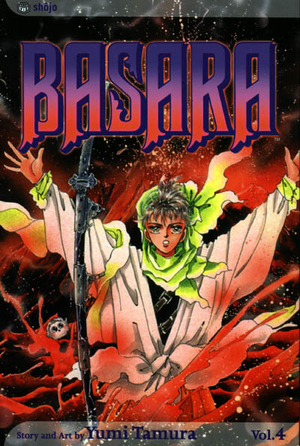 Basara is an award-winning manga created by Yumi Tamura, which ran from 1990 to 1998 in Bessatsu Shoujo Comic. It was later adapted into a thirteen-episode TV series in 1998, which started airing two months before the manga ended. It centers around a sixteen-year-old girl, Sarasa, who uses her wits and the Power of Friendship to lead the people of a Post Apocalyptic future Japan to freedom.

At the end of the 20th century, an undisclosed catastrophe destroyed the civilized world driving society back to a feudal level. Japan is ruled by the Golden King, a tyrant who came to power by assassinating everyone ahead of him in the line of succession. Now his greatest fear is to suffer the same fate. To avoid this he divided the land among his three sons, the Black King, the Blue King and the Red King, so they would expend all their energy fighting each other instead of him. Naturally it's their subjects who suffer most by this.

In the tiny Village of Byakko in the now desertified western region of Japan, a pair of brother-sister twins are born under a prophecy: one of them will become the Child of Destiny and lead the country into a new era of freedom and prosperity. The boy Tatara is taken for the Chosen One, while his sister Sarasa languishes in his shadow. However, when the local ruler, the Red King, learns of the prophecy, he attacks the village, finding Tatara and executing him. Sarasa disguises herself as her brother to keep her people from falling into despair.

Newly promoted to leader, Sarasa initially only seeks revenge against the Red King for murdering her family, but over the course of many adventures her motivation gradually shifts to dethroning all the kings and establishing a country where everybody is equal. And as if leading a rebellion wasn't enough for a sixteen-year-old, Sarasa's relationship with Shuri, a Tall, Dark, and Handsome stranger she meets time and again on her journey complicates her life further.

Now with a character page.

Not to be confused with Sengoku Basara. Or Nekki Basara.