Behind Every Great Man 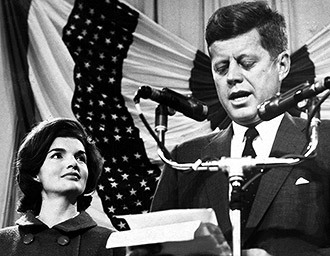 "I worked my way up to be a GM at a Sbarro in Tel Aviv. Then one day I’m stuffing couscous into a calzone, and I realized a woman’s life is worth nothing unless she’s making a great man greater."
— Amy Schumer, "Foodroom,"

Behind Every Great Man...stands an even greater woman!

Or in about a hundred variations is a Stock Phrase referring to how people rarely achieve greatness without support structures that go generally unappreciated and said support structure is a traditionally female role via being the wife, mother, or sometimes another relation. This trope is specifically about a man who is credited with something important but owes much of his success to the woman in his life.

He could be a noted scientist, a great scholar, a famous artist; regardless, everybody who's anybody knows his name. The only thing is, he's not the one who's doing it. Someone else is. And "someone else" is a woman. Maybe it's his wife, maybe it's his sister or his cousin. Whoever she is, he's getting the credit for her work.

Most often, this is because the woman has some reason not to want her name attached to the work. Maybe her writings, art, or scientific discoveries would never be taken seriously if people knew that a woman was behind them. Given a choice between her work being ignored and having it claimed by another, she might choose to let a male claim the credit. Sometimes she's happy that she doesn't have to occupy the spotlight, and can work in peace without dealing with the paparazzi (who her puppet usually takes in stride). Other times she is jealous, and bitter about the fact that she cannot simply step forward and claim her work as her own.

This trope is fairly common in historical fiction and seems to have a feminist undertone more often than not. It can sometimes be the result of Heir Club for Men, when the male heir turns out to be incompetent and his wife/mother/sister can't take over running the kingdom openly.

The Man Behind the Man is not a Distaff Counterpart, since that can still be a woman and the two can overlap. The woman in this trope specifically cannot claim credit for her own work because she is a woman. Additionally the The Man Behind The Man is far more often the puppetmaster, while this trope can still have the man being a dominant role if the woman is way too shy or otherwise unwilling to be in the spotlight, or he is actively stealing her work and sexist norms prevent her from resisting this treatment.

Related to Moustache de Plume, where the masculine "front" identity is fictional. Never a Self-Made Woman gives us the reverse situation (a famed woman is that way because of a male connection) but has a lot of the same underlying assumptions. Lady Macbeth may be (but doesn't have to be) an example. See also Puppet King if the wife is a consort whose influence is strong enough that she effectively rules a nation through him.

Nakia is the Real Hero

Nakia is the Real Hero