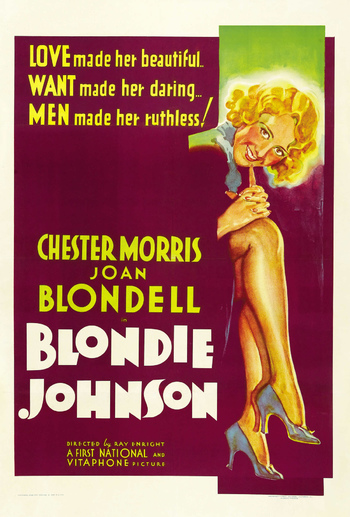 These legs are all you're getting from Blondie.
Advertisement:

Blondie Johnson’s (Joan Blondell) been kicked around by the depression: her mother is dead, and she can’t find a job anywhere without some schmoozing boss trying to take advantage of her. Her main drive becomes swindling and forgetting about honesty. Befriending a taxi driver (Sterling Holloway), they begin to con whomever they can get their hands on.

Blondie’s smart, she’s brutal, and she doesn’t believe in any of this “female wiles” business either; it’s always business before pleasure at all times. Her wits and determination is what she uses to get her way.

Eventually, her small-time con catches the eye of Danny Jones (Chester Morris), the second-hand to a big gangster, Max (Arthur Vinton). Blondie sees an opportunity with Jones and decides to help him free Louis (Allen Jenkins), his pal, from a sure-fire conviction. With Danny at her side, Blondie works up the underground ladder. However, Danny’s the only one that’s made her business before pleasure motto a hard one to follow.

Max, on the other hand, is none too pleased with Danny, so he literally runs Danny over for getting too ambitious. Knowing the threat that Max poses, Blondie schemes to rub him out once and for all. The gang, run by Blondie’s genius, snuff Max out, and Danny starts running the front, making their business schemes look legitimate.

Unsurprisingly, Danny’s head starts to get big, forgetting who helped him get there. He manages to enrage Blondie, so she gives him the boot, and now she's the one in charge.

Directed by Ray Enright, Blondie Johnson (1933) was Blondell’s first solo starring role, and a rare gangster flick where the gangster is a woman. Even more surprising for a pre-code, she doesn’t use sex to get what she wants.

"The only thing worthwhile is tropes. And I’m going to get it, see?”: