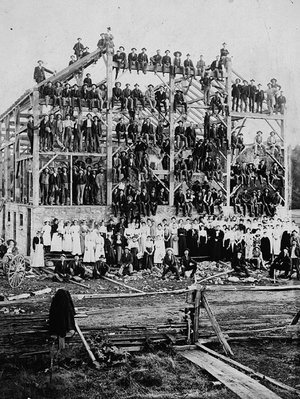 In Ye Old Olden Days, people lacked the sort of high-tech construction equipment that is standard these days for putting together larger buildings. Furthermore, smaller communities were generally out of the way from where large numbers of professional construction workers could be found. This could have left such communities in a bit of a tight spot when its citizens found themselves in need of larger buildings such as barns, town halls, and churches. Rather, they could have had these Ye Old Olden Day folks not been the sort of people who were really good at coming together for such activities as the Barn Raising.

Commonly associated with both Down on the Farm and the Amish, a barn raising is a traditional communal activity where neighbors from all around would come together to help put up a barn (though similar activities could also result in the aforementioned buildings such as churches). Men will be found cutting lumber and putting up scaffolding, women will be found cooking and feeding the men, and children will be found getting the men water, moving the food from the women to the men, and playing. Of course, there can be some musicians to provide some music to liven up the work.

From all of this, a brand-new barn quickly emerges; one that the whole community can be proud of with a vibrant feeling of togetherness.