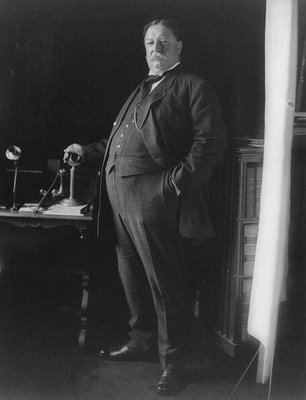 It's the smallest picture Google could find.
"We are all imperfect. We can not expect perfect government."
—William Howard Taft
Advertisement:

William Howard Taft (September 15, 1857 – March 8, 1930) was the 27th President of the United States (1909 to 1913), following Theodore Roosevelt and preceding Woodrow Wilson. He was the ninth President from the Republican Party. He also served as Governor-General of the Philippines

to baseball. Interestingly, he was also the first president to throw out the ceremonial "first pitch" on Opening Day.

Known for being pretty heavy and allegedly getting stuck in his own bathtub (though that was a myth; Taft had an extra-large tub installed before taking office, and when he traveled, he showered). We also all know that the Oval Office used to be called the Round Office until he walked in. Taft had a sense of humor about his weight, though, often joking about it himself.note Taft loved telling a story from his time in the Philippines: he telegraphed Elihu Root, Roosevelt's Secretary of War, that he had ridden a horse that morning and was "feeling fine." Root replied: "How's the horse?" More troubling to his contemporaries was Taft's tendency to fall asleep at public events. Funnily enough, he lost at least 80 pounds during his presidency and he became more interested in the outdoors afterward.

Taft's presidency is generally considered So Okay, It's Average by historians. Although generally more conservative than Theodore Roosevelt, Taft largely continued his predecessor's economic and foreign policies, initiating a variety of antitrust actions against corporations (namely US Steel, something even Roosevelt had been reluctant to pursue), instituting import tariffs against foreign powers like the United Kingdom and attempting to peacefully expand US influence in Asia and Latin America. He supported liberalizing immigration standards, especially for immigrants from Japan and China, although congressional and state opposition limited his ability to achieve reforms in this area.note Due perhaps to his service as Governor-General of the Philippines, Taft treated American relations with Asia as his highest diplomatic priority, to the dismay of his advisers who viewed Europe as more important. He appointed an amazing six judges to the Supreme Court (only George Washington and Franklin D. Roosevelt could claim more, with seven each) while in office.

Nonetheless, Taft's administration wasn't free of controversy. He has often been criticized for his response to the The Mexican Revolution, where he backed Porifiro Díaz's regime against the rebels led by Francisco Madero due to heavy American investment in that country, though he stopped short of direct intervention.note Taft also narrowly survived an assassination attempt while visiting Mexico in 1909; a Texas Ranger acting as Taft's bodyguard arrested a gunman who planned to kill him and Díaz during a meeting in Ciudad Juárez. Taft also became the first Republican president to campaign heavily for White support in the South, receiving criticism from African-American leaders for appointing segregationist judges and civil servants during his administration while rolling back the number of Black appointees. And Taft's conservative approach to conservation caused one of the enduring controversies of his administration; a dispute with Chief Forester Gifford Pinchot over the status of public lands in Alaska resulted in Taft firing him. Roosevelt cited this as the last straw in his break with his former protégé and ultimately led Roosevelt to challenge Taft's reelection.

As America: The Book pointed out, Taft was also the only president to become Chief Justice of the United States, but nobody remembers that. Taft was also responsible for ordering electric power installed at 1600 Pennsylvania Avenue. It was his wife Helen who suggested that Japanese cherry trees be planted throughout the city of Washington, D.C., and these remain one of the city's most famous features to this day.

It's worth noting that becoming Chief Justice (or at least serving on the Supreme Court) was his life's dream: he only ran for president because T.R. and his wife wanted him to (ironically, as his wife suffered a stroke shortly after his inauguration, she was never able to enjoy her office as much as she might have liked). Almost as ironically, it would be T.R. running third party that prevented Taft from getting a second term; said rift between T.R. and Taft drove the Republican Party away from progressivism, which would later be picked up by Teddy's Democratic cousin, FDR.note That said, both the Republican and Democratic parties still technically operated under a big tent model, and wouldn't solidify into predominantly conservative and predominantly liberal organizations until the Ronald Reagan years. Both men regretted the split, and Roosevelt and Taft publicly reconciled shortly before TR's death.

In 1921, President Warren G. Harding appointed Taft to the Court, where he became the only former president to have administered the oath of office to an incoming president (He did it for both Calvin Coolidge and Herbert Hoover). He's usually held to have been a good Chief Justice — indeed, the traits that made his presidency somewhat messy (hesitation, considering all sides of the issue at hand, worrying over every little detail, etc.) were qualities that usually work well for a judge. Moreover, these very traits are probably what led him to write a famous dissenting opinion in Adkins v. Children's Hospital, in which he argued against the very laissez-faire, classically Republican idea of "freedom of contract" as a fundamental constitutional right. (Taft's view of the issue would be adopted in due course, over several cases, primarily issued by justices appointed by FDR.)note Less controversially, but no less famously within the legal profession, Taft also wrote the decision of Old Colony Trust Co. v. Commissioner, one of the premier taxation cases in US history. It decided that if your employer pays your income tax, that is itself income, and must be taxed as income to you. Confusing, but Taft had good reason for it.

He was the last president to have a mustache, or indeed, facial hair of any kind, possibly reflecting a rather unfortunate bias against it. Also the first president to be buried at Arlington National Cemetery.

Taft came from Ohio (Cincinnati, to be exact), and his family

is still active in Ohio state politics. (They also founded the now-defunct Taft Broadcasting, which owned, in addition to television and radio stations, Hanna-Barbera, Ruby-Spears, and other various entertainment ventures; Dudley Taft lost control of the company in 1987, and it was subsequently renamed to Great American Broadcasting and later Citicasters. It ultimately was absorbed into what's now iHeartMedia.

In a bout of Self-Deprecation, Taft once said in regard to his presidency, "The truth is that in my present life I don’t remember that I ever was President."

With his health in decline, Taft resigned from the Supreme Court in 1930, but not before being assured that Charles Evans Hughes would be his successor. Taft died shortly thereafter.