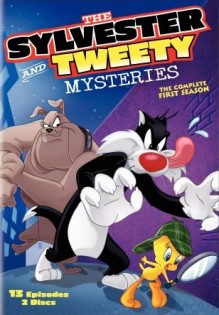 The chase goes on with each new mission
With backdrops aplenty, globally
And through it all they're in contention
Sylvester and Tweety Mysteries!
—The Theme Song
Advertisement:

The Sylvester and Tweety Mysteries was the second original television series of the 1990s to be spun off from the Looney Tunes shorts (the first being Taz-Mania). It ran on Kids' WB! from 1995 through 2000. The final episodes, "The Tail End' and "This is the End", never aired on Kids' WB, but did air on Cartoon Network in 2002.

The series centers on the adventures of Looney Tunes stars Sylvester, Tweety, and Hector the bulldog, and their owner Granny. Each episode, they are on vacation or called to some location where they have to solve a mystery going on, hence the series' title. Each episode starts with someone calling "the greatest detective in the world" to solve a case. Said detective is always unavailable, so they give up and settle for Granny. She takes her three pets with her wherever she goes, unaware of their endless conflict.

Actually, Granny does most of the detective work, but her pets do provide help from time to time. Of course, during all this, Sylvester is always trying to eat Tweety, but Hector, taking the role of the bird's bodyguard, is always making sure he doesn't.

Many of the supporting characters had guest appearances and cameos as the episodes went on. Cool Cat, a character in the later Warner Bros.-Seven Arts shorts, or something in his likeness appeared in just about every episode as a cameo.

While the first season featured episode-long plots based around the mysteries, the following seasons split the shows into two 10-minute segments that focused less on mysteries and more on the group's globe-trotting adventures, most being based around of older cartoons.

On February 17, 2021, it was announced Tweety will star in "Tweety Mysteries", a series similar to this except that it will be a live-action/animated hybrid.