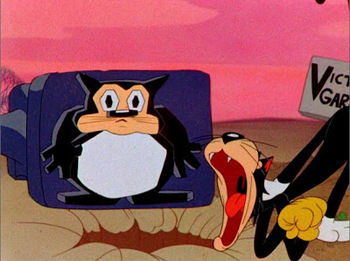 "A Tale of Two Kitties" is a 1942 Merrie Melodies cartoon, directed by Bob Clampett. It is notable as being the debut film of Tweety Bird., then known as Orson.

The plot is centered on two cats, Babbitt and Catstello, who are looking for something to eat, and they decide to target a seemingly harmless baby bird resting high up in a nest in a tree. However, it quickly turns out that the seemingly innocuous bird is smarter than he lets on, and he actively fights back against the cats, while the duo continue to banter with each other along the way.

The cartoon is in the public domain and can be seen here.

"A Tale of Two Kitties" provides examples of: