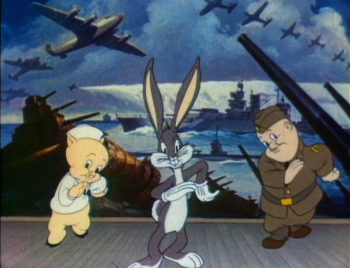 "Any Bonds Today?" is the fan nickname for a 1942 untitled War Time Cartoon featuring Bugs Bunny, Porky Pig and Elmer Fudd and directed by Bob Clampett. With a total length of 1 minute and 38 seconds long it's the shortest officially released Looney Tunes cartoon of The Golden Age of Animation.

This was one of the 12 Bugs Bunny cartoons banned by Cartoon Network for showing now racially insensitive content, though, much like "What's Cookin' Doc?", this is one of the least offensive shorts on that list. At worst, the short comes off as a product of its time, thanks to the short scene of Bugs donning blackface and singing like Al Jolson, as well as the fact that it's a commercial encouraging viewers of the time to buy war bonds.