Western Animation / There They Go-Go-Go! 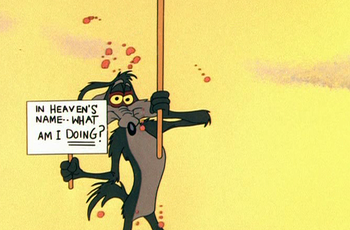 "Chariots of Fur" would also have these Exact Words.
There They Go-Go-Go! is a 1956 Looney Tunes cartoon starring Wile E. Coyote and Road Runner. It was directed by Chuck Jones.

Wile E. Coyote tries his luck with food when he sculpts a handful of mud into a roasted chicken, but ends up losing a tooth in the process since the mud's appetizing shape doesn't automatically make it edible. Having discarded it with with a mud-sculpted trash bin, his longtime nemesis, the Road Runner, runs him and the bin over. When the Coyote flips open the top of the lid and notices the Road Runner, the chase begins. However, the Coyote decides to shortcut his way through by cutting through the winding road. He gets his feet (and tail) set on fire by the flames left behind by the Road Runner to signal the end of the chase. Afterwards, he concocts some new schemes to catch the bird, which of course, work out as well as they usually do.