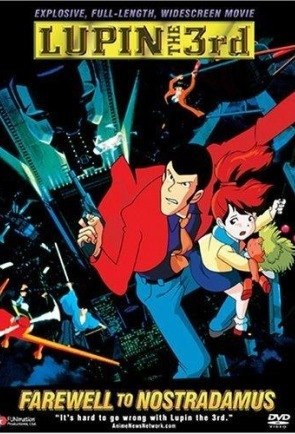 Farewell To Nostradamusnote  Original title: ( ルパン三世 くたばれ!ノストラダムス Rupan Sansei: Kutabare! Nosutoradamusu) In English: Lupin III: Die! Nostradamus) is the fourth animated feature length film in the Lupin III series, first released in Japan on April 22, 1995. It is noteworthy for being the very first entry in the Lupin franchise to feature Kan'ichi Kurita in the titular role of Lupin, following long-time voice actor Yasuo Yamada's death the previous month. Funimation licensed the film for US release in 2002, along with Lupin III: Dead or Alive and eight annual TV specials.

Lupin and Jigen have just finished another job in Rio De Janeiro, hidden their prized diamond in a cute dolly, and board their next plane to America. However, a bratty girl called Julia takes the doll for herself, but not long after that she is kidnapped by a sect. Fujiko, who was hired as her nanny, explains to Lupin that the girl is the daughter of Douglas, a wealthy man who just entered the next election for presidency and owns the only known copy of Nostradamus' lost book of prophecies in the vault of his skyscraper. The Nostradamus sect happens to be after the book as well and use Julia as leverage to force Douglas to drop out of the election. Thus, Lupin has no choice but to rescue Julia, get into the vault and steal the lost book, all whilst staying one step ahead of the Nostradamus sect, if he ever wants his diamond back.

Farewell to Nostradamus features examples of: