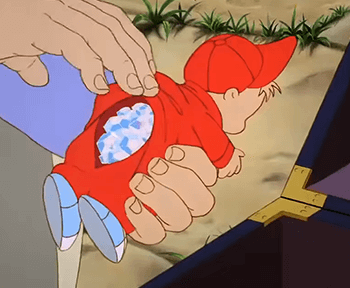 Dolls and stuffed animals are often used as a symbol of childhood innocence, at least when they're not being creepy. So, who would suspect that the innocent little dolly, often in the hands of a child, has something less than savory in it that someone wants to slip under the watchful eyes of a higher authority? It might be stolen gems, illegal drugs, spy information, or other secrets that someone hopes everyone else will overlook; after all, what could possibly be dangerous about a cuddly teddy bear?

There's something rather insidious and reprehensible about using such a strong symbol of childhood to get things under the radar. Often, using a doll to smuggle something demonstrates or emphasizes the person committing the crime is highly unethical. At the least, they're corrupting a child's innocent toy, and at most they're willing to put an actual child with said toy at risk by using them to achieve their goals. Sometimes, a doll will be found with the goods, but the actual child long gone, implying a less than happy fate for the tot. Sometimes, the doll is an Orphan's Plot Trinket, where a lonely child who took simple comfort in a doll finds out it has actually been used to hide something valuable for all these years. And in the most extreme examples, the very doll itself will be made of an illicit substance or stolen material.