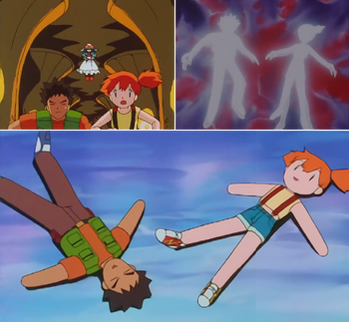 They're all dolled-up now.
"Violent dumbass heart so rrrotten, become soft with a heart of cotton! A twisted soul who yelled and swore, cause a rrrrrruckus NEVERMORE!"
— The Wizard, Suction Cup Man
Advertisement:

There are people out there obsessed with toys. This obsession gets to the point where they will turn other people into toys for their amusement or collection.

When somebody gets turned into a toy, they could still be very much alive. However, their now inanimate body renders them unable to move around or call for help.

In some circumstances though, they are still very much able to move. When this is the case, they could work on trying to find a way to change back.

This trope is usually exemplified with dolls. Sometimes of the voodoo kind or sometimes just a regular raggedy doll. Other may include a motionless action figure. Less conventional choices can still pop up, however. What is always consistent is that the toys will have the physical features of those transformed, such as hair, the face, clothes, etc.

The inverse of Become a Real Boy. Subtrope of Objectshifting. Supertrope to Puppet Permutation. This may also be part of The Doll Episode and related to Living Doll Collector.