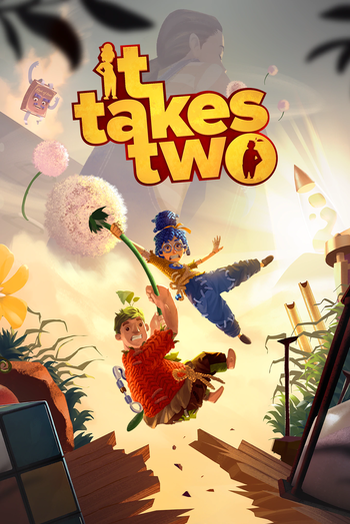 It Takes Two is a genre-busting action-adventure video game developed by Hazelight Studios and published by Electronic Arts. It is the third game by writer and director Josef Fares, who previously made Brothers: A Tale of Two Sons and A Way Out. Just like A Way Out, It Takes Two has no single-player option: It is playable only in either online or local split-screen co-op between two players.

The story follows Cody and May, an estranged couple whose souls/minds have been transferred into dolls by their daughter Rose. The two must learn to work together with assistance from a magical book named Dr. Hakim in order to repair their relationship and return to the real world.

A feature film adaptation of the game was announced

in April 2022 for Amazon Studios. Pat Casey and Josh Miller (Sonic the Hedgehog (2020)) will write the screenplay and Dwayne Johnson will produce through his Seven Bucks Productions label.