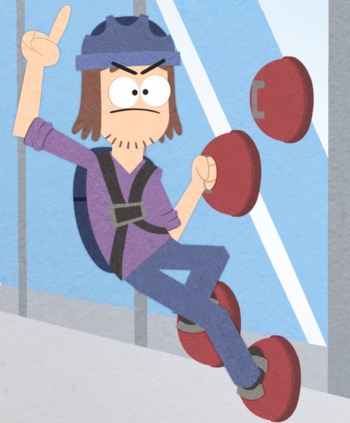 DA-DA-DA-DA-DA, SUCTION CUP MAN, LOOK AT ME GO!
Suction Cup Man is comin' round
My sucking powers have no bounds
Suction cups all red and shit
I'm pretty hot, you must admit
Do not test my sucking power
I'll climb your tower in just an hour
You can't kill me, I'm way too cool
I'm smudging up your windows, fool!
—Suction Cup Man singing his theme song
Advertisement:

(and a dose of South Park satire), Suction Cup Man is a series of animations created by Mike "Piemations" Pitts and Benjamin "DoubleAAntics" Kahan

In this series, a raunchy guy with a raspy voice called Suction Cup Man infuriates another character by climbing up their property with suction cups. Eventually, the two parties end up in a verbal scuffle, capped off by Suction Cup Man singing a brief jingle of his own as a final insult. So far, Suction Cup Man's main opponents have been a business owner nicknamed "Business Guy" (his most prominent nemesis), a parody of Kim Jong-un, and Satan himself.

At the time of writing there are four animations (plus one remaster) released, including:

On top of that, there's a theme song

and an advertisement for the official Suction Cup Man Plushie.