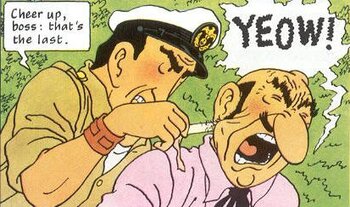 Adhesives are everywhere in the world, from the natural to the manufactured. Tree sap, tar, duct tape, bandages, superglue...

They have one job. To stick to things. But sometimes they do the job a little too well. Especially when what they stick to is a person, and the adhesive has to be removed. This is typically painful.

Frequently shows up in modern Bound and Gagged situations. Especially using things like duct tape as a quick and efficient way of silencing someone (Silence is Golden. Duct Tape is silver).

Of course, adhesives can end up in places other than one's mouth, and if there's body hair involved, it can be just as, or even more painful to remove. Basically, if it's sticky and it hurts to peel it off of you, it goes here, unless it's the subtrope of Painful Body Waxing.

Sister Trope to Cuffs Off, Rub Wrists. Compare/Contrast Duct Tape for Everything.