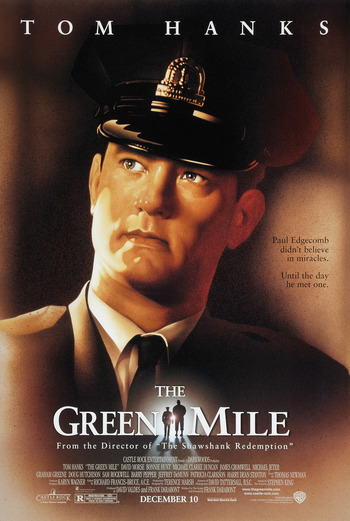 "I do not see God putting a... gift like that, in the hands of a man who could kill a child."
"I guess sometimes the past just catches up with you, whether you want it to or not. Usually, death row was called 'the last mile'; we called ours 'the Green Mile' - the floor was the color of faded limes. We had the electric chair - 'Old Sparky', we called it. Oh, I've lived a lot of years, Ellie, but 1935 - that takes the prize. That year, I had the worst urinary infection of my life, and that was also the year of John Coffey and the two dead girls."
— Paul Edgecombe
Advertisement:

The Green Mile is a film adaptation based on the book of the same name by Stephen King, which was released on December 10th, 1999. It was directed by Frank Darabont (The Shawshank Redemption). And like Shawshank, it was an Oscar charmer, if not a winner.

In 1935, Paul Edgecombe (Tom Hanks) works as a corrections officer in Cold Mountain Penitentiary's death row, which was given the nickname "The Green Mile". His primary duty is to send off criminals to their final fate with the electric chair. When John Coffey (Michael Clarke Duncan), a gentle, towering black man, is found near the corpses of two girls, he is imprisoned and sentenced to the chair. This eventually leads Paul to discover the mysterious, supernatural powers that John possesses, even as time ticks closer towards the day of execution. Regardless, Paul's life will be irrevocably altered by John's miracles.

The Green Mile contains examples of:

"We each owe a death. There are no exceptions. But, oh, god... sometimes, the Green Mile seems so long."