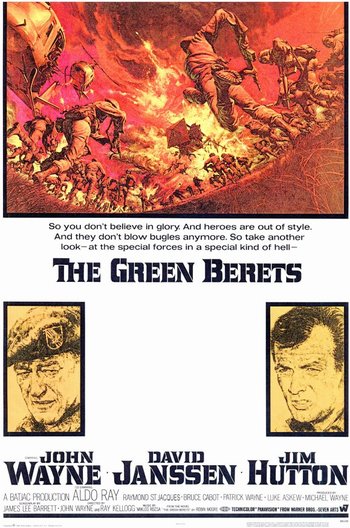 A war film released in 1968, starring and (co)-directed by none other than John Wayne (Ray Kellogg was the other co-director). It was the height of The Vietnam War and public opinion in the US was already at the tipping point.note The Tet Offensive, which began the same year, has been called the point when America lost the war. The Duke was unhappy with the anti-war protests and general discontent that surrounded him. In order to counteract that, he decided to make a film about the Army's elite Special Forces, also known by their nickname "Green Berets".

The film is about a reporter named George Beckworth (David Janssen), who is very critical of the war and is reporting on a group of Green Berets who are about to leave for Vietnam. Initially, he has a low opinion of the "brainwashed" soldiers but when asked if he has ever been to Vietnam, he realizes that he does not really know what the situation on the ground is like and decides to travel there to see the war for himself. When Beckworth gets to Vietnam, he finds that it is nothing like what the critics back home have been saying and is forced to confront his own personal beliefs out in the unforgiving jungle.

The film was very controversial for its pro-Saigon and American stance. Critics were upset with how it seemed to glorify the war (and, indeed, there have been not-quite far-fetched claims that this was the only reason why the film was ever rated G in the first place; it helped that the establishment at the time was very pro-war) and painted an overly simplistic picture of what was actually going on. Oliver Stone was inspired to create Platoon after seeing the film and it is partially a response to this one. Incidentally, more than a few currently serving Special Forces soldiers have cited it as an inspiration for their decision to wear the Green Beret.

The Green Berets provides examples of: