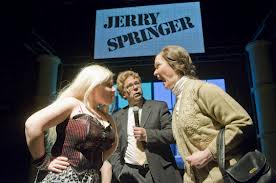 "Ladies and gentlemen... Welcome to the worst show on television!"
Jer-RY! Jer-RY! Jer-RY!
Fight! Fight! Fight!
They're always swearin', cursin', kickin' butt, and pointin' blame
On the air? They don't care, they've got no shame
There was one guy who I'm sure felt a little strange
When he found out that his wife had a sex change
They have a tendency to scream and yell constantly
They have a history of ripping off their shirts
— "Weird Al" Yankovic, "Jerry Springer" note (Parody of "One Week" by Barenaked Ladies)
Advertisement:

Jerry Springer, more colloquially referred to as The Jerry Springer Show, is an American syndicated tabloid talk show produced and hosted by its namesake, a former mayor of Cincinnatinote He was best known at the time for trying to pay a prostitute... with a city government check. It's important to note he became mayor after the scandal and was pretty popular while in office - in fact, his honesty about the scandal (rather than trying to cover it up) is part of what got him elected mayor in the first place.. Airing from September 30, 1991 to July 26, 2018, peaking in popularity between the late '90s and early '00s, the show is inseparable from its reputation as one of the most infamous Guilty Pleasures in American television history, to the point of having to pull itself up in content quality to qualify as "Trash TV". TV Guide named it as the worst show ever — which it proudly declared at the start of every episode. It (along with Ricki Lake and Jenny Jones) paved the way for shock talk shows, and also outlasted most of its competition in the process.

In the show's first few years, before it became wildly popular, it took a more serious approach, with episodes that dealt with serious issues and politics (in one episode, Jerry spent a night with a homeless teenager living on the streets). However, they came to the realization that the formula of "poking guests with sticks until they started fighting" earned much better ratings.

Your standard episode will feature a woman telling her husband's mistress to stay the *beep* away from her man, then dumping him at the end of the episode. Then there's usually some sort of crossdresser and a person with some weird sexual fetish. Maybe a young girl who sleeps with older men. Every now and then you also get Klansmen and neo-Nazis for good measure.

The show is notable for its security, as fights start about five times an episode. Similarly, Springer let his security chief, Steve Wilkos, fill in for him; this led to Steve getting his own talk show, which deals with very serious issues and is most definitely not the walking cartoon that Springer's show is.

It goes without saying that the show couldn't be quite that bad without some help. While (presumably) most of the guests are real note (Professional wrestler JC Ice has played guests on the show, and wrestlers from Maryland Championship Wrestling

have been used as well. In return, Steve teamed with WWE's Gillberg — A rip on WCW's Goldberg) — on their March 27, 2002 show), the production crew has admitted to giving them advice on how to make a better show out of their issues. In addition, Jerry and Steve themselves often dispense advice, on-stage or off-stage. A short-lived show called The Springer Hustle covered the backstage activity.

The 1998 movie Ringmaster starred Jerry playing, essentially (but not in name), himself; the next year, he also showed up in the second Austin Powers movie, with Dr. Evil and Scott as guests.

In 2003, Stewart Lee and Richard Thomas launched the long-running London musical Jerry Springer: The Opera. The plot has Jerry shot by a guest, whereupon the Devil forces him to host his show in Hell and thereby try to reconcile the devil's realm with Heaven. The musical's religious satire, combined with heavy use of profanity, led to protests by Christian groups and even an attempt to prosecute the producers under Britain's blasphemy law, which didn't succeed because the law in question was vestigial.

On June 13, 2018, NBCUniversal announced it was canceling the series after 27 seasons due to low ratings, with the final episodes being taped on July 6 and the finale airing July 26. However, The CW—as part of its acquisition of rerun rights that fall—has the option to resume production of the series. In September 2018, The CW began airing the reruns as its sole weekday daytime programming, replacing The Robert Irvine Show (ironically as it is basically a watered-down version of Jerry's show). The rerun ended in September 2021, as the network chose to give up its daytime slot in return for a two-hour Saturday primetime slot. Meanwhile, Jerry moved on to host the courtroom show Judge Jerry (a Judge Judy copy), which started airing in national syndication in September 2019. Judge Jerry itself was canceled in 2022 after three years, likely bringing an end to Springer's television career.

"Until next time, take care of yourselves...and each other!"