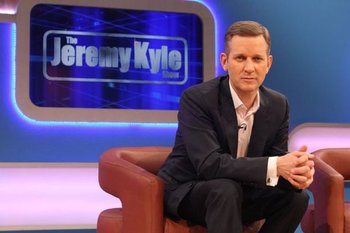 "Of course, it's not really fair to call [The Jeremy Kyle Show] a show, because it's more a distinguished public forum for civilized debate. Sorry, did I say civilized debate? Because what I actually meant to say was: It's a non-stop bellowing festival, in which a cast of people who resemble a sort of aquatic livestock chart the outer limits of incomprehension."
— Charlie Brooker, Screenwipe
Advertisement:

The Jeremy Kyle Show was a long-running British Talk Show which aired weekdays on ITV in the UK. It ran from 2005 to 2019.

The main aspect that separated the show from American tabloid talk shows like Maury and Jerry Springer is that Kyle was a much more hands-on host, who wouldn't hesitate to call out guests for being duplicitous or criticize both of the main parties. He typically straight up told his guests to get themselves together instead of goading them into getting more dramatic (as is more typical for talk show hosts). He also got very personally involved in the guests' problems, using Brutal Honesty or sitting in front of them to deliver advice.

In 2011, a Transatlantic Equivalent began airing on The CW and FOX affiliates in the States. It lasted two seasons before being cancelled in 2013.

Production was suspended and the show removed from the ITV schedules and online catch-up service ITV Hub in May 2019, because a guest committed suicide a week after filming an episode

in which a lie detector indicated he was cheating on his girlfriend.note  Lie detectors are notoriously unreliable in determining if the person tested is telling the truth or not and are not accepted as evidence in most courts of law so any results need to be taken with, at best, a grain of salt. Speculation abounds

as to whether the show had a direct role in influencing this person's unfortunate death, which as of 2022 seems to be the most likely cause. In any case, one day after being suspended, the show was canceled.

A Channel 4 documentary broadcast in 2022 alleged serious malpractice in the production, with guests deliberately riled up and manipulated, the staff themselves not being treated much better. Kyle is currently taking legal action over claims he sees as defamatory.

The show features examples of the following tropes: