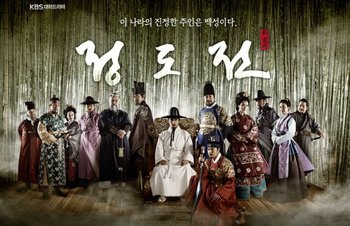 Jeong Dojeon (정도전) is a 50-episode South Korean historical drama which aired on KBS on 2014. It stars Jo Jae Hyun as the titular character, a Confucian scholar who seeks to start a revolution and laid the foundation of the Joseon Dynasty.

It is the waning years of the Goryeo Dynasty, with the royal court is overrun with corruption. The high ranking minister Yi In-im rules through a puppet king with his fellow aristocrats. Jeong Dojeon is a low-ranking scholar who wants to fight this corruption, but is ultimately powerless to do anything, even getting exiled at one point. After much hardship, he decides that there is no hope for the ruling dynasty, so he plots to overthrow the current government and start a new era, with war hero Yi Seonggye (Yu Dong-geun) as its new monarch. Other opponents of Yi In-m include Choi Young, also a war hero, Jeong Mongju, Dojeon's friend since childhood, and Yi Seonggye's fifth son, Yi Bangwon.