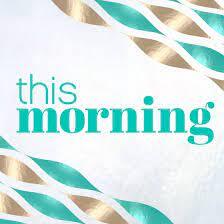 Joyful Theme
This Morning is a British daytime television programme created by Granada Television and broadcast on ITV. The show originally aired from Granada's Albert Dock Studios in Liverpool on 3 October 1988. It features celebrity guests, entertainment, and various other features - in short, a mix of consumer show and Variety Show.The Show was originally hosted by husband and wife Richard Madeley and Judy Finnigan making it groundbreaking in the fact the show was hosted by a married couple, the show wasn't advertised or believed to last until December and yet it became a groundbreaking hit that is more popular than ever.
Advertisement:

Currently, the presenters are:

If any of the four presenters are off or unavailable a guest presenter will co-present This Morning. Famous ones have included Gethin Jones, of Blue Peter fame, Rylan Clark-Neal, Amanda Holden and Davina McCall. Former presenters include the aforementioned Richard Madeley and Judy Finnigan, who left in 2001 for Channel 4 to broadcast their own chat show, and Fern Britton, who joined as a presenter for the Friday episodes in 1998 and transitioned to the Monday-Thursday episodes in 2002 all the way until 2009.