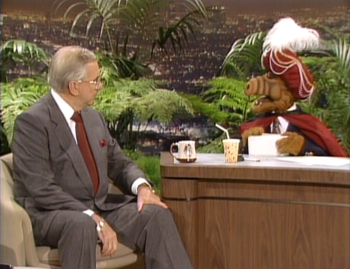 "For my next trick, I will make your regular host reappear! ... the cat, not so much."
"Welcome to The Daily Show with Jon Stewart. Ironically enough, I'm Stephen Colbert."
—Stephen Colbert
Advertisement:

Most light entertainment shows (be it morning news, chat show, or quiz show) will have a host. Generally speaking, it's always the same person/s day in, day out, providing seamless links, interesting conversation, probing questions, and needed stability to the show. But what if they want to go on holiday or — heaven forbid — fall ill... What then? The show must go on, after all.

Cue the guest host, a temporary stand-in until the full-time host returns. It may be one guest host, or a succession of guest hosts. If you're lucky, it's somebody appropriate and even chosen by the full-time host (or, in some cases, a previous regular host or the presenter of a foreign iteration of the show). If not, you could end up with a wild change of tone in the show.

There's another version of this where a show only has guest hosts on instead of a regular.