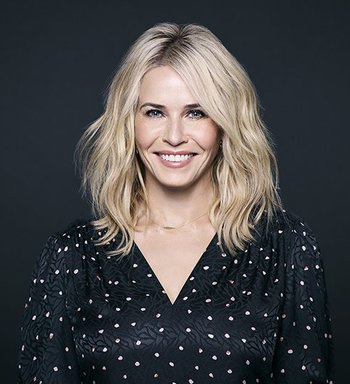 Handler is best known for hosting a series of talk and variety shows, most notably Chelsea Lately, which aired on E! from 2007 to 2014. She later hosted Chelsea on Netflix, which was the streaming platform's first-ever daily Talk Show.

Handler is also a published writer of personal essays and memoirs. Her 2008 book, Are You There, God? It's Me, Chelsea, was later turned into a (short-lived) NBC sitcom executive produced by her, starring Laura Prepon as a fictionalized version of herself and Handler as the character based on her real-life sister Sloane.

In addition to writing and hosting, Handler is also an actress, appearing primarily in supporting roles in comedic works like This Means War (2012) and Fun Size. In February 2019, it was announced that Handler would be executive producing Tigra & Dazzler, an animated Hulu series based on the Marvel Comics characters of the same names; she will also be voicing the former.

As host / producer / herself: