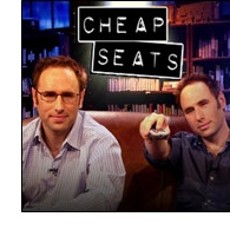 Jason and Randy Sklar. Or is it the other way around?
Advertisement:

Cheap Seats is a show on ESPN Classic that is hosted by twin stand-up comedians Randy and Jason Sklar. The two watch old campy sports and make funny comments about them.

The Back Story goes that a long time ago (on February 4, 2004) a man named Ron Parker (Michael Showalter), "an anchor with attitude", was filming the first episode of Cheap Seats with Ron Parker. The show was slated to go big. However, moments into filming, he was buried under a stack of tapes and his loyal but poorly treated assistants, the Sklar brothers, had to fill in for him ("like Gehrig for Pipp or Brady for Bledsoe") as they were the next people in line before Ryan Leaf. Thus the show became Cheap Seats Without Ron Parker.

The show itself ran for 77 episodes and the finale aired on November 19, 2006. The first ten episodes were an hour long, with the remaining running 30 minutes. The hour-long episodes were edited down, with some scenes reshot, to allow reruns in the shorter time slot. Occasionally, this leads to orphaned jokes or other discontinuity note See season 1, episode 2, "Cal vs. Stanford", where the Cheapies show two shots of Elway tripping immediately after the snap, while only one appeared in the half-hour show, or season 1, episode 8, "Superdogs! Superjocks!", where "What 2 Look 4" warns of an obscene number of dog puns, but most were cut from the shorter episode.

Guest segments were also common, either with recurring characters like The Answer Dog or The Score Settler, or with characters tangent to the action (as portrayed by comedians). Other segments took more of a documentary approach, but were still fictitious and played for laughs, like the history of a labor strike in the world of professional miniature golf.