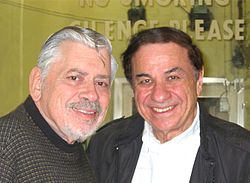 American songwriters Robert Bernard Sherman (December 19, 1925 – March 5, 2012) and Richard Morton Sherman (born June 12, 1928) have written some of the best-loved and most recognized songs in motion picture history. One of Disney's most successful songwriting teams, the music of the Sherman Brothers can be heard in such classics as Mary Poppins, The Jungle Book and Chitty Chitty Bang Bang. (The Last of These Is Not Like the Others, as Chitty was a United Artists film, albeit heavily inspired by Disney's success with Mary Poppins.)

Long before Disney audiences were introduced to "A Whole New World" in the animated feature Aladdin, the Sherman Brothers brought the world a little bit closer with their universal ditty "it's a small world". Today, they remain the quintessential lyrical voice of Walt Disney.

Born in Manhattan, the Brothers' father was Tin Pan Alley songwriter Al Sherman, who penned such Depression-era songs as, "Potatoes Are Cheaper, Tomatoes Are Cheaper, Now's the Time to Fall in Love," which became one of comedian Eddie Cantor's signature tunes and "Livin' in the Sunlight, Lovin' in the Moonlight", made famous by Tiny Tim (and by extension, SpongeBob SquarePants).

In 1951, the Sherman Brothers' first song, "Gold Can Buy You Anything But Love" was recorded by cowboy crooner Gene Autry and played daily on his radio show. Their big break came in 1958 when Mouseketeer Annette Funicello recorded their song "Tall Paul", which shot up to number seven on the charts and sold 700,000 singles.

The Sherman Brothers continued to write a string of top ten hits for Annette, including "Pineapple Princess," plus Johnny Burnette's "You're Sixteen" (later a number-one hit in a 1974 cover version by Ringo Starr) before Walt Disney took notice and soon hired them as staff composers. In all, the Shermans wrote over 150 songs for Disney. Many of these were featured in the studio's animated films, such as The Sword in the Stone, The Jungle Book and The Aristocats, for which they cannily coaxed Maurice Chevalier out of retirement to sing the film's title song. They contributed to such films as The Parent Trap, Bedknobs and Broomsticks and the entire The Many Adventures of Winnie the Pooh series, including Winnie the Pooh and the Blustery Day, as well as television shows, such as Zorro and Walt Disney's Wonderful World of Color. Among their last projects before leaving Disney were songs for EPCOT Center and Tokyo Disneyland.

When Walt acquired the rights to a popular series of books by author P.L. Travers, he handed the brothers their most plum assignment. Mary Poppins was the studio's most ambitious film to date, featuring one of Broadway's biggest stars, Julie Andrews, numerous visual effects, impressive combinations of live-action and animation, and, of course, music. The Shermans wrote all fourteen songs for the score, which has become one of film's most enduring soundtracks. Mary Poppins also brought the brothers' Academy Awards for Best Music Score and Best Song ("Chim Chim Cher-ee").

It was another of the film's songs, "Feed the Birds", however, that proved to be Walt's personal favorite. So enamored of the song was Walt, in fact, that he never tired of hearing it.

The Sherman brothers had a huge comeback in 2000 with the score to The Tigger Movie, their first major motion picture effort for Disney in over 28 years. Other significant screenplays and scores include Snoopy, Come Home, Come Home, Tom Sawyer, Charlotte's Web, The Slipper and the Rose and The Magic of Lassie, the latter two of which each received an Oscar nomination. Richard Sherman even contributed the deliberately Disney-esque song "Make Way For Tomorrow" to Iron Man 2.

With a career that spans almost 50 years, the Sherman Brothers amassed numerous accolades, including two Academy Awards (from a total of nine nominations), two Grammy Awards, 23 gold and platinum albums, and a star on the Hollywood Walk of Fame. They also earned the BMI Richard Kirk Award for Outstanding Career Achievement at the performing rights organization's 1991 Film/TV Awards.

About their Disney career, Richard said, "There's a line in Mary Poppins that says, 'A man has dreams of walking with giants to carve his niche in the edifice of time.' At Disney, we walked with giants."

They are played by Jason Schwartzman and B.J. Novak in Saving Mr. Banks.

For more, go to this page.