Music / Huey Lewis and the News 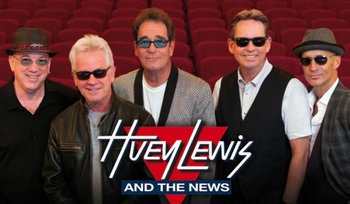 "Their early work was a little too New Wave for my tastes, but when Sports came out in '83, I think they really came into their own, commercially and artistically."
— Patrick Bateman, American Psycho
Advertisement:

Huey Lewis and the News are a brass rock/R&B band from San Francisco fronted by vocalist/harmonica player Huey Lewis.

The band evolved out of Clover, a Bay Area country rock band that moved to London during the pub rock years. Clover minus Lewis backed Elvis Costello on most of My Aim Is True. Lewis and most of Clover's then-current lineup formed The News soon after returning to San Francisco in 1978.

The group's heyday was the The '80s, where their brand of feel-good rock n roll and memorably cheesy music videos made them a staple of the older MTV crowd. Some of their most famous songs include "Hip to Be Square" (famously used in the scene in American Psycho when Patrick Bateman frantically analyzes the song before chopping up his colleague with an ax), "I Want A New Drug," "Do You Believe In Love" and "Stuck With You." They also contributed two songs to Back to the Future, "The Power of Love" and "Back in Time" (Lewis himself makes a cameo in the film).

Their popularity wained considerably in The '90s and their recordings have since become far more sporadic, releasing only four albums between 1991 and 2010, two of which were covers albums. They remained a hugely popular touring act until 2018, when Lewis was diagnosed with Meniere's Disease

, an auditory disorder which can cause significant hearing loss, forcing the band to cancel any and all future tours indefinitely. A new album, Weather, recorded before Lewis's condition worsened, was released in 2020. Lewis later said that the band will continue if he can stabilize his hearing.

Not to be confused with Hewy's Animated Movie Reviews. And certainly not with one of Donald Duck's nephews.

I used to be renegade, I used to trope around: