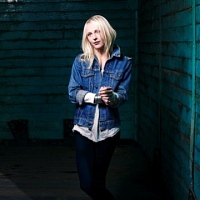 Laura and her denim jacket.

You’re described as folk artist Laura Marling. Is that a fair label?
"I think it’s fair. I don’t think it’s accurate. I would have to say that I prefer folk to singer/songwriter or acoustic. I think folk comes with a more palatable image than acoustic. But I’m sure there are some traditional folk musicians that aren’t so happy with me having the label."

Just not as a singer/songwriter.
Or a folk artist.
Or an acoustic artist.

Laura Beatrice Marling (born 1 February 1990) is an English singer-songwriter noted for serious talent. She released five critically acclaimed albums at the age of 25. When she was 16, she released a few songs on her MySpace profile (remember that?), and began touring. Around a year later, she had a debut EP ready to go, but she then signed with Virgin Records, and Alas I Cannot Swim came in 2008. This record was more poppy, earning comparisons to Regina Spektor and Martha Wainwright, and merely a hint of the music to come.

Two years later, she released I Speak Because I Can, which was far more critically acclaimed than her first album. This album, produced by Ethan Johns, was more slick and had a Darker and Edgier feel. Like her first album, it was nominated for the Mercury Prize. In 2011, she released A Creature I Don't Know, with Ethan Johns again at the helm. This album gave her more comparisons to Joni Mitchell, one of Marling's heroes.

Her next album Once I Was An Eagle was released in May 2013. It was 16 tracks long, beginning with a medley of four songs. With this one, Laura Marling outgrew the Mumfords and the Whales critics used to compared her to, and truly came into her own as one of the greatest modern songwriters.

In March 2015, after a year of soul-searching in which she briefly worked in jobs other than music, she came back with Short Movie. This is a much more uptempo affair than the dour Once I Was An Eagle, where she displays a sense of humor not always seen in the last few albums.

Then, in 2017, she came back with an album titled Semper Femina, or "always a woman". Femina explores sexuality and gender in a way that Marling hasn't before, with the help of Blake Mills. She also takes on a more soulful sound.