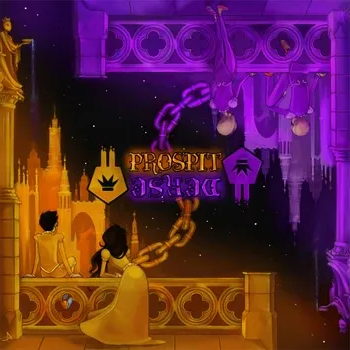 In basic complementary color theory, Color Contrast (a Super-Trope) refers to the use of any two polar opposite colors on the wheel. When such colors are put together in a single image, with almost no other color presence, the effect is called popping, or standing out heavily. This, in turn, colors films to have a strong contrasting palette as the natural technique. It is seen regularly in Orange and Blue, sometimes in Red and Green, and, though technically values rather than true colors, even in Black and White.
Advertisement:

So where does that leave Yellow and Purple?

As the closest colors to black and white in terms of their difference, this is the clearest contrast on any colorspace. Thus it is used to indicate light and darkness, sun and moon, day and night, shades of electricity, Good Colors, Evil Colors (particularly if they are royal factions, as gold and purple are historically reserved for royalty), or any other Color-Coded Characters or motifs that can be imagined (compare the aforementioned).

Warning signals are almost always indicated by some shade of yellow or gold. Depicted positively, it signifies spirit, spirituality, a Primary-Color Champion, earthiness, and a sense of warmth, and bees. Depicted negatively, it signifies body neglect (such as Gold Tooth), cowardice, and greed. And again, bees. Among others, wealth, blondes, and physical power can go in either direction.

Supernatural and mysterious elements tend to be indicated by purple or violet. When depicted positively, it signifies wisdom, depth, and balance (particularly between the Onis). Depicted negatively, it signifies poison, dark magic, a Secondary Color Nemesis, or excessive pride. Either way, Purple Is Powerful (and/or graceful).

Also compare Color-Coded for Your Convenience, and Color-Coded Emotions, in which yellow usually portrays happiness and purple portrays melancholy (while both can portray types of fear).

NOTA BENE: To qualify as an example, both colors must be used simultaneously to symbolize an In-Universe relationship (in other words, context). If they are merely displayed colors, such as on an athletic uniform, it does not fit.

The showdown between Giselle and Malvina begins with them firing color-coded beams of magic at each other. This causes a small explosion that knocks everyone backwards.

The showdown between Giselle and Malvina begins with them firing color-coded beams of magic at each other. This causes a small explosion that knocks everyone backwards.