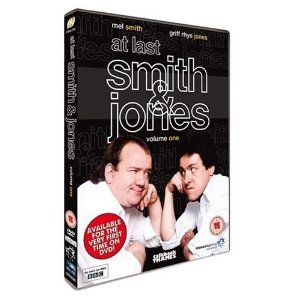 After Not the Nine O'Clock News ended and Rowan Atkinson struck out on his own, Mel Smith and Griff Rhys Jones made this Spiritual Successor Sketch Show, which ran from 1984 to 1998. Not to be confused with Alias Smith and Jones, the American series which its Pun-Based Title references; some series of the show dropped the 'alas' from the byline and went out simply as Smith and Jones.

Like Not the Nine O'Clock News before it, the humour was often quite taboo, and cheerfully employed Mood Whiplash by going from elaborate sketches with complex humour to rapid-fire slapstick or one-shot gags and then back again. Probably the best known, and defining, recurring feature was the "Head to Head" sketch, in which Smith and Jones' characters face each other across a black void and have an inane Seinfeldian Conversation. This is an example of what Harry Enfield calls a "Thick Bloke and Thicker Bloke" routine: Jones' character is an idiot who gets everything wrong, while Smith corrects him, but is still thicker than the audience and often gets it wrong in a different way in his corrections. Some series also had a domestic recurring flat sketch (possibly inspired by Morecambe and Wise), usually carrying a story thread throughout an entire episode, cutting back to it in between the other sketches. Episodes also sometimes started with Mel and Griff on stools facing the audience, supposedly As Themselves introducing the show, but actually carrying on a surreal stand-up routine.

After the show ended, Griff Rhys Jones largely moved away from comedy in favour of presenting documentaries, while Mel Smith went on to do multiple projects, the best-known probably being Brain Donors and the film adaptation of Bean. The two still acted together on occasion and reunited in 2006 to present The Smith and Jones Sketchbook, a compilation inspired by The Two Ronnies doing the same thing shortly before. Any hopes of further material were dashed after Smith passed away in 2013.