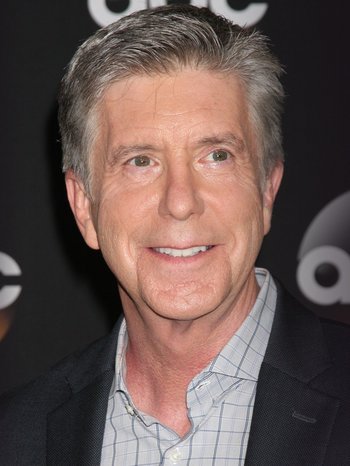 Thomas Raymond Bergeron (born May 6, 1955 in Massachusetts, U.S.A) is an American actor and game show host. He is best known for his time as the host of both Dancing with the Stars and America's Funniest Home Videos.
Advertisement:

Of French-Canadian and Irish descent, he first gained notoriety as a disc jockey for a local radio station. He would go on to develop into an on-air personality through the radio, and by the The '90s had his own talk show known as The Tom Bergeron Show. From there, his career only continued to grow, leading to his two Star-Making Roles.

He has also written I’m Hosting As Fast As I Can! Zen and the Art of Staying Sane in Hollywood, an autobiography focusing on his early life and career. He also has a novel, Drive Time, in the works.