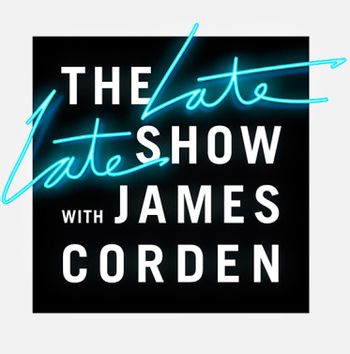 The current host for the program is English actor-comedian James Corden (who you might remember from Gavin & Stacey, The Wrong Mans, and two episodes of Doctor Who). He is accompanied by musician Reggie Watts and a respective band. From time to time, Corden's family also drops in on the show for some added hijinks. The show airs new episodes regularly during the first four nights of the week, then takes a break on the last night with a rerun. Corden will be stepping down as host in 2023.

A Spin-Off of Corden's version, Carpool Karaoke: The Series, began airing on Apple Music in 2017, later migrating to Apple TV+ beginning with its fifth season.

Not to be confused with the second longest-running chat show of all time (after The Tonight Show), which is made and broadcast in Ireland on RTÉ.

Specific series who have their respective pages:

Tropes associated with The Late Late Show include: