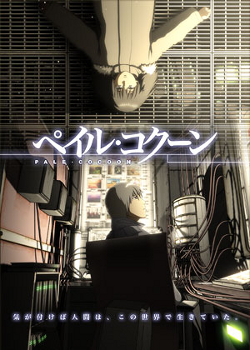 Pale Cocoon is an OVA anime written by Yasuhiro Yoshiura, who would later go on to make Time of Eve.

Ura is mining digital archives of the distant past for information. The world in the future he lives in is one of elevators, glass and shining metal, and that's all he's ever known. When he looks at the old files, he sees and wishes the past's animals and blue sky and growing plants. Their own environment was about to be destroyed, so all of humanity moved. Ura wants to know when this happened in the past. There's one archive file that he's looking for, because he thinks the lost files of their past could define their future in a big way. His coworker, Riko, has become distracted and listless, and he has become increasingly obsessive over his research.