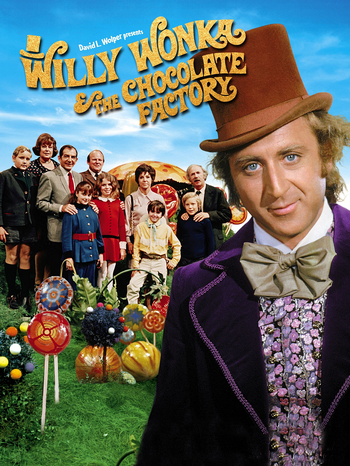 The Candy-Man can, 'cause he mixes it with love and makes the world taste good!
"Come with me, and you'll be in a world of pure imagination..."
— Willy Wonka
Advertisement:

Released in 1971, the film was largely made as an effort in Product Placement to promote a new real-life Willy Wonka candy bar being released by the Quaker Oats Company (hence the change in the title). It was directed by Mel Stuart and features Gene Wilder as Willy Wonka and Jack Albertson as Grandpa Joe. Anthony Newley and Leslie Bricusse provided the song score. Dahl himself wrote the film's script, but parts of it were edited and re-written by David Seltzer.

For the second film adaptation, see Charlie and the Chocolate Factory. In addition, there are several variations on this version floating around in other media:

The extensive character sheets can be seen in Charlie and the Chocolate Factory.

Willy Wonka & the Chocolate Factory provides (in addition to many of the source novel's tropes) examples of:

open/close all folders
Tropes A-I
Tropes J-Z
Wonka: Don't forget what happened to the man who suddenly got everything he always wanted.
Charlie: What happened?
Wonka: He lived happily ever after.
Feedback

Example of:
No OSHA Compliance