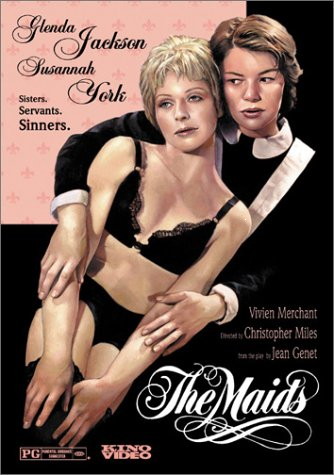 "When slaves love each other, it's not love"
— Solange
Advertisement:

The Maids is a 1975 British drama film directed by Christopher Miles, based on an absurdist play of the same title by Jean Genet, which in turn is very loosely based on the case of infamous Papin sisters

It revolves around the sado-masochistic hate-love relationship of Solange (Glenda Jackson) and Claire (Susannah York), two Psycho Lesbian sisters serving as maids. When their mistress is away, they take turns putting on her clothing and impersonating her while the other still plays a maid in a ritualistic game. Slowly, the urge to kill their beloved and hated mistress becomes stronger and stronger, and their deranged minds weaker and weaker...